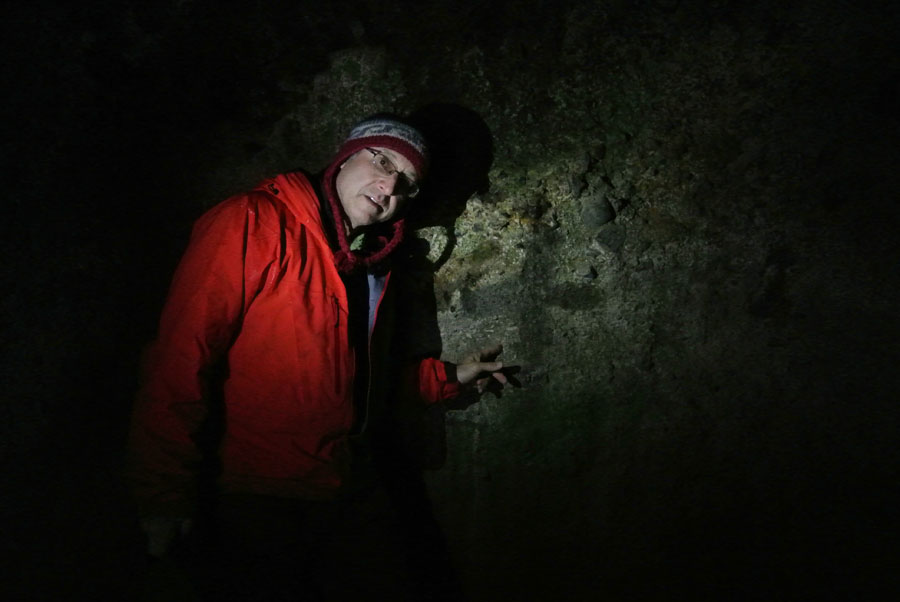 I’d known of the “idea” of Irish Monks living/settling in caves in Iceland in the early 800AD era (predating the norse settlement period by about 70 years) for many years. It wasn’t until I had read “Last Ritual” by  Yrsa Sigurdardottir where the popular crime novelist brings this into popular culture, and, much more importantly Kristjan Ahronson’s archeological text Into the Ocean:Vikings, Irish and Environmental Change in Iceland and the North (Univ of Toronto Press, 2015) that this “idea” became one I had to experience. Fortunately we, Margot and I, were going to Iceland in March 2017 and we have local friends who were curious about all things Icelandic. I merely had to mention the idea and “Cave Day” was hatched. Aevar Adalsteinsson hadn’t been to the caves either. He planned the day. I brought the camera and enough newly read archeology to fill a book. In all we visited four caves. There is no tourist hype here, just big and small dug out or natural openings in rock out crops with limited parking lots, no concession stands or “I visited…” t shirts. There was permission needed at one cave, Hellar (50 metres long with 5 chimney holes). Joanna who runs the farm on which the Hellar cave resides, provided an informal tour. Even for this cave there was curiously limited signage.

What lingers from the day is the evidence of something special archeologically speaking, that is a game changer or for some a royal pain-in-the-ass for Icelandic settlement history. In the Seliland cave (really a strange rock out crop-pictured here) there are over 90 religious crosses and other engraved symbols. Experts can validate their Celtic origins. In the Kverkarhellar cave close by Seliland Falls, beyond the dominant two crosses, there is the cave soiled debris which contains evidence of a volcanic ash sediment layer which can be dated to a local volcanic eruption in 800AD. There is also evidence of environmental disruption to surrounding soil caused by human activity such as domesticated animals and forest cutting. The accurate dating of these disturbances again is around 800AD, seventy years earlier than the conventional settlement history story popularly told in Iceland.

To put it mildly, the four caves visited that day well armed with Ahronson’s book, was an exhilarating time:not just history in-you-face but history slowly in the process of being retold. It is currently a stretch to appreciate and confirm these celtic monks travellings to Iceland and beyond but in light of such findings, this history/anthropology needs to be pliable.

Manage Cookie Consent
We use cookies to optimize our website and our service.
Manage options Manage services Manage vendors Read more about these purposes
Preferences
{title} {title} {title}
Thoughts and admittedly a bit of a rant  on the Wilderness Superhero “Look-at-Me” Adventure NarrativeBlog, Travel